On this day, the 1st October 1882, in Venice, a Society with the name “Bucintoro” is hereby established for the purpose of promoting and facilitating the use of the oar.

So began the Royal Bucintoro Rowing Society, for over 130 years an integral part of the city of Venice.

The Society Museum at headquarters is testimony to the prowess of its rowers in waters worldwide: from the first international victory in 1884, they have been present at the Olympic Games of Athens, Paris, Antwerp, Berlin, Helsinki, Rome, Barcelona, Atlanta and Beijing as well as at world championships, European and Italian championships and amateur competitions.

In keeping with its founding principle, the Bucintoro today promotes the use of the oar for traditional voga veneta (Venetian rowing), modern rowing and dragon boats, as well as Vela al terzo, the traditional combination of sail and oar particular to the Venetian lagoon.

Practicing and preserving the rowing heritage of Venice, for today and for future generations, is ever the first priority of the Bucintoro.

Along with sport, the Bucintoro has been a focal point for cultural activities since its founding. Its motto, “Senz’ali non può” (“Without wings, none can fly”), was coined for it in 1908 by poet Gabriele D’Annunzio; it was at the Bucintoro that Giorgio De Chirico organised the Antibiennale of 1950. The Bucintoro’s cultural and social activities have continued in recent years with events such as Marco Zentilomo’s Conferences on Venetian History (2015-2016), Art Night 2015, and its contributions to the Special Olympics Italia (2014) and Dreaming of Ithaca, a project of the Italian Leucemia Association for children affected with leucemia (2014), to name a few.

Since 2009, the Bucintoro is also proud to host, with the collaboration of A.V.A.P.O. Venezia, the Pink Lionesses, a group of cancer survivors who row for both therapy and solidarity.Gallery: the Bucintoro in images 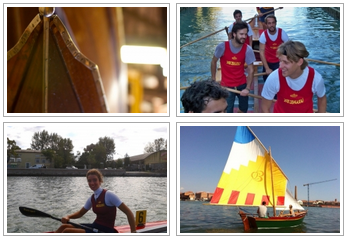